Vaping is the act of inhaling vapor from a personal vaporizer. These are commonly known as an electronic cigarettes or "e-cigs" for short. It is important to understand that no smoke is involved in vaping. "Smoking" is a term that simply does not apply to this subject.

Vape: Used to describe the act of vaping as well as the vaporizer itself.  In 2014, "Vape" was chosen by the Oxford Dictionary as word of the year. The event marked the rise in popularity of the practice of vaping. 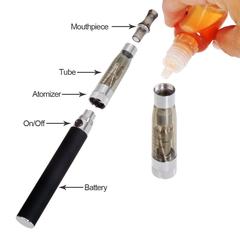 When a vaporizer is triggered (either by inhaling or the press of a button), a battery heats up the heating element (atomizer) which boils up a tiny amount of e-liquid. As a result, vapor is created.  This vapor is what the user inhales. Keep in mind that the use of a vaporizer does not involve the burning of any substance. The process of combustion does not take place, and so vaping produces no smoke, no ash and no tar.

E-Liquid or e-Juice is the liquid that goes into the atomizer and is normally composed of up to 5 ingredients (not main ingredients with a giant list of other stuff, all ingredients):

The base makes up 80-90% of e-liquid and is composed of 100% VG or a mix with PG (See Below for information). Most common ratios are 80/20 VG/PG, 70/30 VG/PG, and 50/50 VG/PG. It is widely used in all types of food and personal care products like toothpaste. VG is what creates the thicker cloud and provides a smooth inhale. Higher mixtures of VG over PG is the most popular mix for most vapers. More information

Commonly mixed with VG as the base for e-liquid. It is a solvent that is used as a flavouring carrier in food products, as an ingredient in food colouring and also used as an additive in various medicines. Along with being a solvent, its mainly known for its use in fog machines. However PG can dry out your throat and even cause mild allergic reactions in some users. Propylene Glycol is non toxic. If you do experience any issues with PG e-liquids, just use higher VG e-liquids (70% or higher). More information

10%-20%. All e-liquids we carry use food grade flavourings originally intended for baking or candy making. Higher-end e-liquids (which are referred to as premium e-liquids) use multiple flavourings to create a special blend of flavour that would not be present in lower end e-liquids. We carry only the most unique and premium e-liquids in the industry, making sure our customers will always have an unmatchable experience!

There are 2 types of nicotine, Freebase and Salt. Freebase has been used since the 60s in traditional cigarettes, and the vaping industry since it started! It has a higher pH balance (meaning higher alkalinity) and gives a higher “throat hit” which many people prefer. Salt Nicotine is made with benzoic acid which lowers its pH balance and alkalinity which makes it much smoother, allowing people to use higher nicotine levels with less harshness. Salt Nicotine is fairly new to the market and are only intended to be used in low power devices due to the high nicotine content. Some companies are producing lower levels (3mg-6mg) in Salt format so they are able to use in medium-high power devices! If you do choose to start with salt nicotine to switch from cigarettes, you’re really in for a treat when you make the jump to freebase nicotine! Tons more flavours become available, and the amount of flavour you’ll get is amazing!

0%-5.0% depending on strength - measured in milligrams per millilitre (mg/mL). All of the brands of e-liquids we carry use pure pharmaceutical-grade nicotine. As a small cheat sheet in how nicotine is measured:

Make sure to pay attention to volume, as some products like JUUL are advertised as 5.0% nicotine content, but being only 0.7mL pods they are actually a ridiculous 59mg/mL of nicotine!

That’s it. From as little as 2 ingredients (VG and flavour) to as many as 5, and theories on nicotine ingestion non withstanding, all used regularly in food products. Remember, the important thing is that e-juice doesn’t contain: the 4000+ chemicals that you may find in a cigarette.

Choosing your nicotine level can be tricky, so we made a full blog/video on how to do so! We go over different nicotine levels for starter kits up to more advance kits, you can read/watch by clicking here!

We included the chart for lower powered starter kits to get you started, but make sure to check out our blog post for the full breakdown! 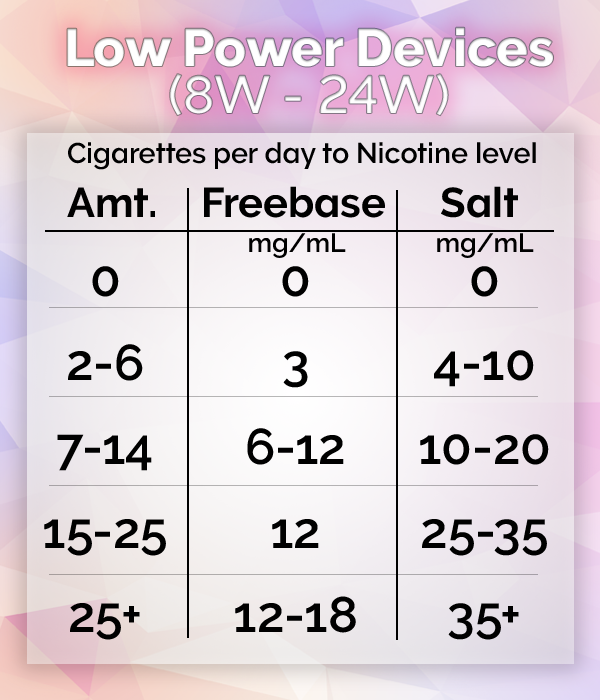 Tanks (sometimes called clearomizers) are the most common devices for vaping. They are generally constructed of stainless steel with a glass tube to hold e-liquid, which feeds into an atomizer, producing vapour. Tanks are usually external, and require a mod or battery to fire them. There are also some devices that have the tank and battery built into one!

These are the tank, coil, and mouthpiece built into one small package! They are usually designed to be replaced entirely, however some take replaceable coils to reduce waste.

The atomizer is what actually creates the vapor! An atomizer is the bridge that contains the cotton and coil to be powered by the battery. Most people refer to replaceable atomizers as coils, so when a device gives a message referring to the atomizer, it's talking about the coil!

Sub-ohm is very simple, any atomizer/coil that has a resistance below 1.0Ω! Devices that can use sub-ohm coils offer much more flavour, and are able to handle much more power to produce bigger plumes of vapour! Sub-ohm has become the most common form of vaping now since the introduction of Sub-ohm Tanks, before only being able to accomplish with Rebuildable Atomizers!

RDAs are commonly used by more advanced users as they require their coils to be installed by hand, which can take a little practice. These are a popular choice for the stronger flavour, more potential for larger clouds, and of course the limitless amounts of customization! An RDA is commonly referred to as a "Dripper", due to the action of dripping juice onto the coils.

RBA is a more generic term for any rebuildable atomizer, whether dripping or a tank.

And RTA is just like any other tank, but instead of replacing coils you rebuild them yourself! These are usually much smaller areas to build in, but give much better flavour compared to disposable atomizers.

This is a cable that at one end attaches to your battery and the other end accepts a standard USB connection from your wall or a car charger. Voltage output for the chargers should not exceed 1 amp.

The voltage output determines the level of heat created in the battery and therefore directed to the atomizer.  A higher voltage results in a warmer vape, with more throat hit. Higher Voltage would also make the juice consumption higher due to the temperature of the vape. The 2 different kinds of devices there are would be Regulated (Voltage Controlled) and Unregulated (battery amp depended) - see below for more information.

mAh short for (milliampere hour) is the measurement of battery life for your devices or the battery itself. The bigger the mAh the longer you will get on a single charge. As far as 18650 battery cell, the best batteries on the market right now are made by Samsung and LG which provide a 3000mAh rating, anything else that claims more is fake and is simply a rewrapped body. Built-in batteries are LiPo cells which are bigger and heavier and therefore have more mAh. The amp is mainly for people using mechanical mods (or unregulated) which heat up according to 2 factors; battery amp power (the higher the stronger) and resistance of the coil.

Built in batteries are LiPo powered batteries which are built into the device and recharge through a micro USB. The benefit of a Built-in battery is that you do not have to buy the battery separate upon purchase of the unit. External Battery mods require the purchase of a 18650 battery cell which is also rechargeable through either a micro USB (built into the device) or externally through a charger. The benefit of the External Battery mods is longevity and interchangeability. At the end of the day, external battery is a smarter choice even though it is more expensive upfront (purchase of a 18650 battery cell). When the built-in battery begins to not hold charge as much as it used to when new, the external battery can simply be replaced giving you full battery life once more.

The process of letting your e-liquid settle, and therefore the true flavour of the liquid to stand out. This is best accomplished by letting the bottle sit for anywhere between 2 weeks to 2 months. The more of a wait the better the steep. Organic E-Liquids can go sour if steeped for too long, so beware.

You must be of legal age to purchase tobacco and cannabis. By entering the site, you are consenting to your State / Province's Smoking Laws and agreeing to our Terms and Conditions & Privacy Policy.

Delivery of Cannabis is only available within the province of Manitoba.